Was to let me fail at some things. 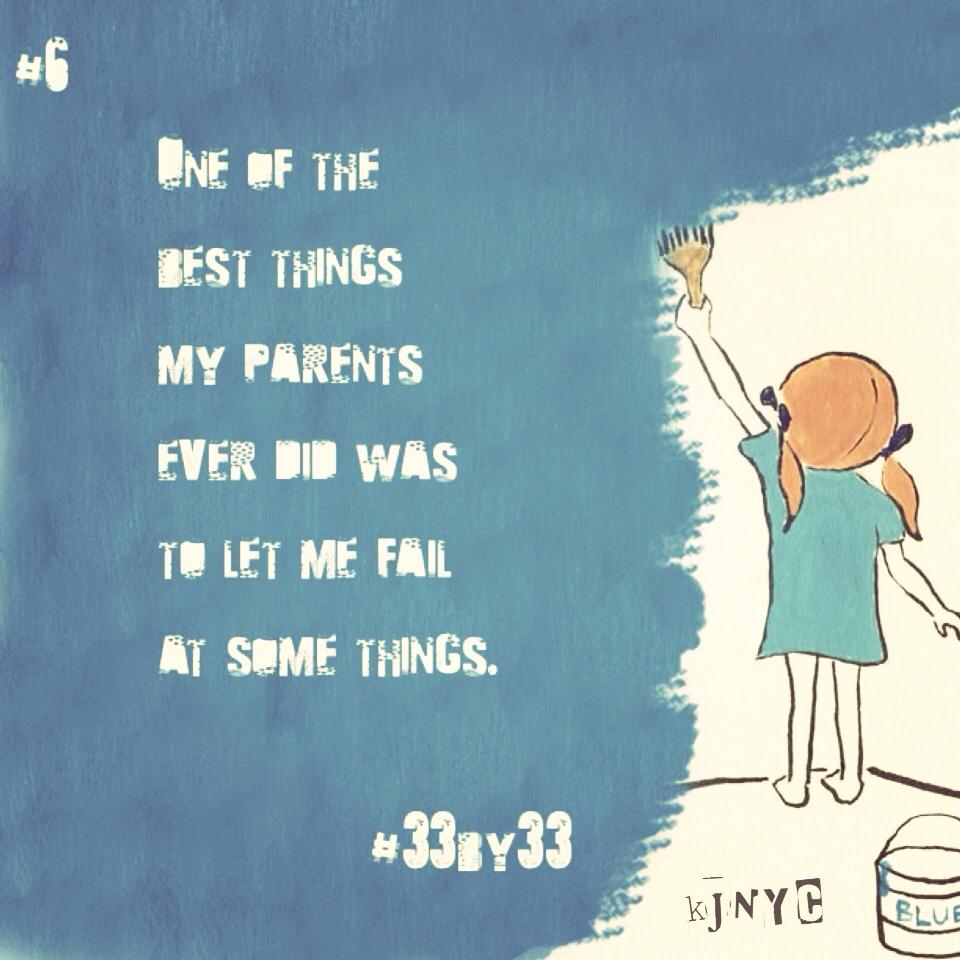 Even though there were things my parents wanted to do (and often could have done) for me, sometimes they let me face — and feel — disappointment.

And I learned the following things: disappointment won’t destroy you; the fear of failure is often worse than the fall; even if I can’t have something that I desire — no matter how desperately, I can find a way to live happily without it. And whether in the presence or absence of all three, work hard or work harder.

When victorious, celebrate. When defeated, try again or try something new. But with either outcome, never stop asking, “What’s next?”

Thank you, mom and dad.
-your tough, little cookie

Recent Posts for the Soul

Katie is on hiatus from corporate Manhattan to dedicate some time to motherhood. She is blogging about the sh!t that is helping new parenthood seem less chaotic for her family at Sh!t That Worked for Us and sharing ideas on how to organize all that sh!t on MOMganized, the latter of which is slowly evolving into an ode to The Container Store. Her previous blog, Blog-By-Bike, chronicled her 50-day cycling journey from Oregon to New Hampshire in 2010. And prior to that, she created Becoming A New Yorker to write about (spoiler alert) becoming a New Yorker. Though she is currently a stay-at-home mom to  Toddler Sydney, she is not one of the heroic mothers who battles through her days alone. Grandma Julie, her live-in mother-in-law, is instrumental in Sydney’s daily caregiving and is Katie’s drinking partner at night.

Carlyle does not know how to blog, but he is incredibly handsome and is a super engaged father when he’s not out winning bread. Having amassed one of the largest privately-owned parenting self-help libraries in their home, he also likely holds the record for the most pregnancy and baby apps on an iPhone. While a pregnant Katie was still submerged in corporate life, he would prep her on what to expect next as she stood, baby bump-length from the bathroom sink, preparing for the workday. While the views and opinions expressed on STWFU and MOMganized are those of the owners, readers should not expect that Carlyle has actively composed or formatted any of these posts. He does, however, bring Katie wine while she types.

Neither one of them are experienced parents.

MOMganized.com contains affiliate links. Though you will incur no additional costs by purchasing a product through an affiliate link, the site owner will automatically receive an insignificant commission. Your patronage is greatly appreciated and helps support her caffeine addiction.